Getting The Hang of It

Like anything new, including a diet, there's an adjustment period. I'm starting to hit my "stride" with this anti-candida diet.

Sure, I still have those darn sugar cravings. But it is getting easier and more "the norm" for us.

When I switched to eating The Endo Diet, the key for me, was to find healthy substitutions for the foods I already love.

For instance, I love Reece's Peanut Butter Cups. But, they are a "no-no" on most diets, for many good reasons. However, in my spare time I read other food blogs or do searches on Google for good recipes that I have cravings for. So, when I came across this recipe, I was so excited to try it! It will be the first thing I make when my Dr gives me the green light for oatmeal, peanut butter and chocolate again! (I'll sub stevia for the maple syrup and if that doesn't work, I'll sub raw yacon syrup or raw honey).

Heathy eating is not about deprivation; it's about healthy substitutions!

Quick housekeeping issue... there are two new tabs on my blog! "Ingredients" will be a series of posts where I write in depth about different ingredients, so you can make the most informed, healthiest choices when grocery shopping. I've already added my post about the healthiest sweeteners. And "Homeschooling" will have posts about just that! We are officially a homeschooling family. I'll start writing posts about why we chose that way, which curriculum we've gone with, things I've learned at homeschooling seminars as well as how our year is going with homeschooling. We'll begin our first year of homeschooling this fall and we are very excited about it!

Now, onto some delicious recipes that I've been enjoying the past week or two... 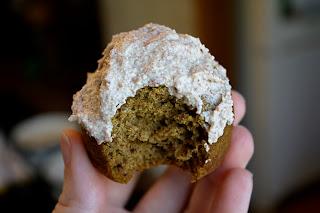 Substitutions:
*brown rice flour instead of amaranth flour (I don't like the flavor of amaranth)
*already ground buckwheat flour, instead of buckwheat groats and grinding myself
*1/3 tsp of stevia powder for the xylitol

Notes: Here's the deal with this recipe. The first time I tasted these, I didn't know if I liked them or not. But, the more I ate them, the more I liked them. I think the problem was that the cardamom flavor was almost overpowering for me. I'll be making these again this week and I'll be substituting Pumpkin Pie Spice for the Cardamom. However, the consistency of these were spot on. They were really moist!

Almond Cream-Filling or Frosting
This recipe was inspired by Pure2Raw's Cashew Lucuma Frosting. This makes a great frosting to the above Pumpkin Muffins, or as a cream filling to any dessert or top your oatmeal with it for a fun twist! 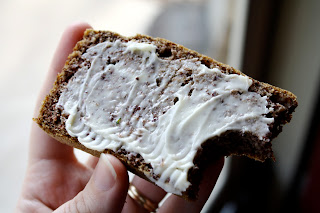 Notes: My search for amazing gluten-free bread is over, I think! For well over a year, I've been making all kinds of recipes for gluten-free bread. The results have been less than desirable, from overpowering flavors to short loaves. This one, however, tastes great! And though I still ended up with a short loaf (which is still taller than other loaves I've made), I realized I need a smaller pan! So, I'll be trying this recipe again this week in a smaller pan to see if that makes that difference. But, hands down, this is my family's favorite gluten-free bread recipe to-date! 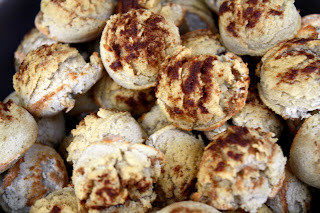 When you were a kid, did your Mom ever make you "Cinnamon Toast"? You know, toast with butter on it and then she'd sprinkle a little cinnamon and sugar on it? Well, this is the health version of your cinnamon and sugar sprinkling!

Notes: I first mixed up the cinnamon and cardamom, then I slowly added stevia powder a little bit at a time and tasted it. Remember that stevia powder is 300 times more sweet than sugar, so you really don't need a lot. 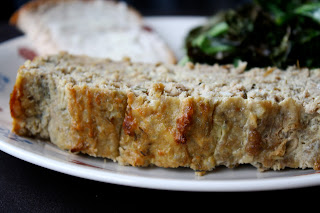 Substitutions:
*ground turkey instead of minced beef
*1/8 tsp chili powder instead of chilies (add more if you like it spicier)

Notes: We doubled the recipe so that we had leftovers. 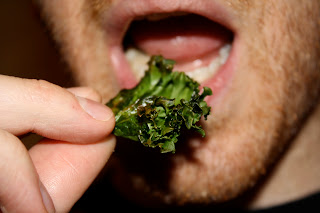 Luckily, this is a good addiction to have! 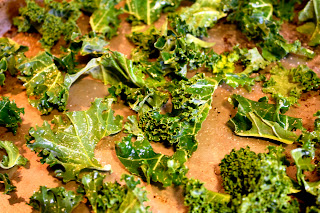 Substitutions:
*Bagged Kale from Trader Joe's is already torn into pieces instead of the heads from your local produce section.
*Spray bottle filled with olive oil instead of drizzling. So much easier!
*Sea salt instead of kosher salt

Notes: I am notorious for getting bored with foods very easily. Rarely will you see me make the same recipe twice and leftovers? No, thanks! I want something new and exciting at every single meal. However, every once in awhile a recipe comes along that I fall in love with and I can't get enough of! That has been Kale Chips for me. I seriously think it's been my main vegetable at the past 4 meals and I want more! haha 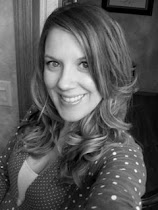